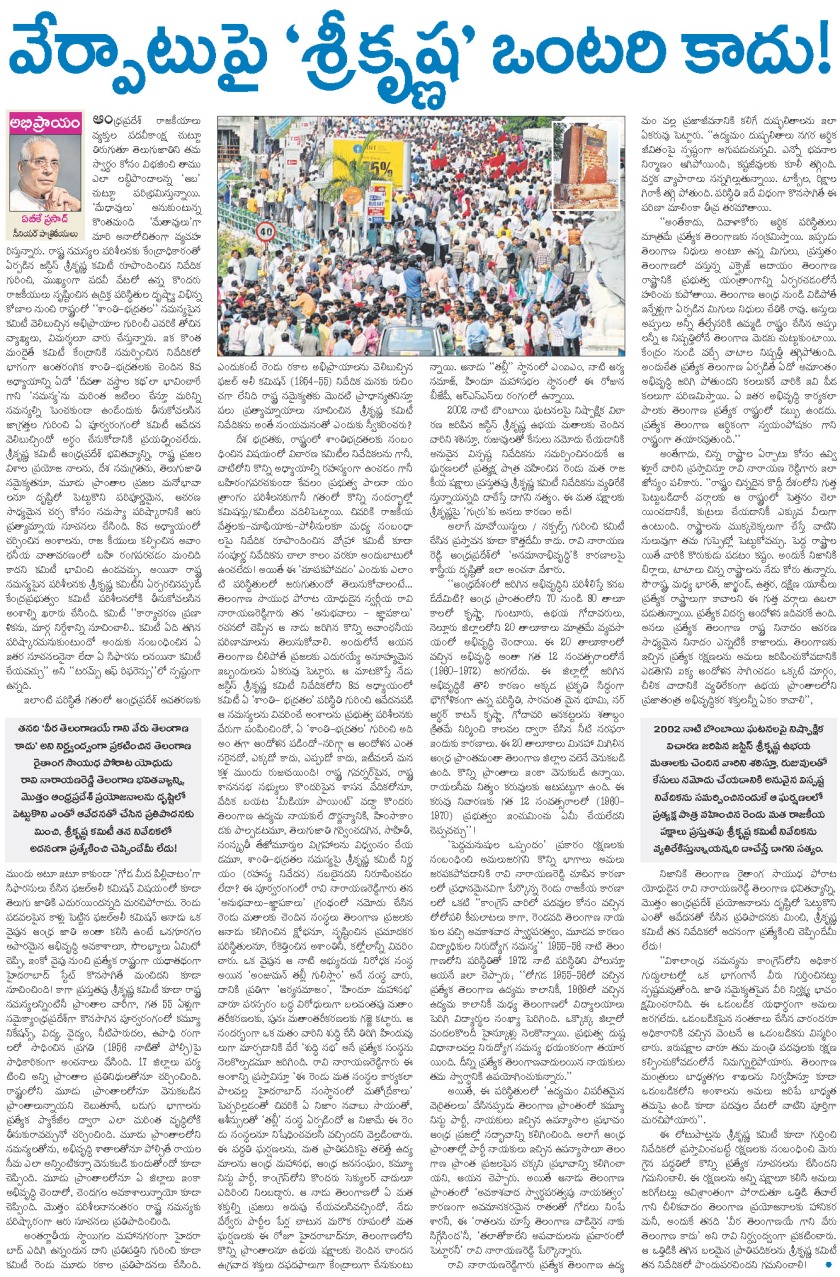 Pachchipulusu khayenge, Telangana leyengey! (We will survive on tamarind soup, but secure a separate Telangana.)

I have mouthed that slogan too. In 1970. On the streets of Himayatnagar and Narayanaguda in the heart of strife-torn Hyderabad. I was a true-blue “mulki”, son-of-the-soil, though my ancestors came from the other side of the Godavari to make the Deccan their home. The slogan drew attention to the fact that while coastal Andhra may have been the rice bowl of the state and Teangana was condemned to dryland farming, the backward region’s politically short-changed Telugus were willing to subsist on tamarind soup, the pride of dakhni cuisine, and secure their self-respect.

It all seems so long ago. Three decades later, the slogans are less evocative and life goes on in a busy Hyderabad unmindful of the revived sentiment in some of the surrounding districts. But the issue is back on the state’s political agenda. The demand for a separate state of Telangana lies at the heart of the ongoing election campaign in Andhra Pradesh. The response of the people across the state to this regional sentiment will determine the political future of one of India’s rising political leaders, Andhra Pradesh’s chief minister, Nara Chandrababu Naidu.

Does language still unite the people of India’s first linguistic state or has dialect come to divide them once again? It is easy to jump to the conclusion that economic backwardness continues to lie at the core of the sentiment for a separate state. This is not entirely correct. There is no doubt that many parts of Telangana remain economically backward, largely on account of low literacy and lack of access to water. However, prosperity has come to large parts of the region and the growth of Hyderabad is trickling along the Bangalore, Mumbai and Vijayawada roads for miles on an end. But till the waters of the Krishna, the Godavari and the Tungabhadra are harnessed for the region, the farmer’s grievance will remain. A common language doesn’t soothe dry tongues and thirsty throats.

The demand for a separate state is not constructed on the farmer’s grievance alone. As in 1969-70, so in 2003-04, the authors of the demand come more from the educated middle classes in the towns of Warangal and Karimnagar who see in a new state new opportunities and more political power. They build their political nest with the leaves of cultural grievance and the roots of economic backwardness.

Anyone familiar with the recent genre of Telugu cinema will understand the nature of the cultural grievance. The “hero” and “heroine” in Telugu cinema speak a Telugu closer to the dialect of the coastal region, while Telangana Telugu, with its mixture of dakhni, is reserved for the movie’s comedian or villain. The comedian and the villain now want to be the hero in this part of Telugu Desam!

Telangana is not like Jharkhand or Chhattisgarh, nor even like Haryana. Apart from the language it shares with the rest of Andhra Pradesh, it is today more integrated economically into the state as a whole. Hyderabad is a truly pan-Telugu metropolis that has come to accept the mix of Telangana’s dakhni culture and the coastal region’s Andhra culture. Economically, the business development of the greater Hyderabad region has made the city integral to the state. But Hyderabad is no Chandigarh for it lies in the heart of Telangana. In this lies the administrative difficulty of bifurcating the state. Indeed, of trifurcating it.

For, if Telangana comes, can dry and drought-prone Rayalaseema stay far behind in voicing its thirst? Moreover, a land-locked Telangana cannot take off in the manner Haryana did, with the latter’s access to New Delhi, and will be dependent on “outside” investors for a long time for its prosperity.

The economic case for Telangana is weak. The political case is weaker still. In a peninsular neighbourhood where Tamil, Malayalam, Kannada and Marathi have their own states, will the Telugus benefit from division? When N.T. Rama Rao launched his Telugu Desam Party, he consciously sought to rekindle the pride in the language that united the Telugus. It is a platform that Naidu today occupies. Caught between the pan-Teluguism of the TDP and the regional chauvinism of the Telangana separatists, the Congress and the BJP have fudged the issue.

The Congress remains a divided house on Telangana, as indeed it has been on Vidarbha. The BJP was united in favour of Telangana because the region’s anti-Nizam struggles of the past favoured its Hindutva plank. Hyderabad’s Marwari business community also encouraged this thinking, having yielded market space to coastal Andhra’s business castes. Today, even the BJP is ambivalent, caught between the aspirations of its communal old guard and its business savvy new recruits who favour a united state.

For this very reason the region’s Muslim community had opposed the demand for a separate Telangana in 1969, feeling more confident about the secular credentials of coastal Andhra’s upper castes. Even now they prefer Naidu’s secularism, but the new found prosperity of Hyderabad’s Muslims may encourage them to rethink their political relevance in a smaller state.

Clearly Naidu is guilty of an error of judgement in dealing with the Telangana demand. Even at this stage he can retrieve lost ground by recognising the social and economic basis of the sense of discrimination the region nurses and revive the idea of a Regional Development Committee, with a development budget. He must share power with panchayati raj institutions at the district level and develop the region’s irrigation potential.

There are today many like me who once supported the demand for a separate Telangana but no longer see sense in it. Andhra Pradesh has struggled for too long to leap out of the category of states below the “national average” to those above. It has waited at the threshold for four long decades and is now poised to make that leap. It can if it stays united. Time for the Telugus to stand up and be counted!

In seeking the soul of the Telugu-speaking people, the heart and mind of the Sri Krishna Committee are conflicted. The Committee for Consultation on the Situation in Andhra Pradesh, chaired by Justice Sri Krishna (Report at: http://www.mha.nic.in/pdfs/CCSAP-REPORT-060111.pdf), has prepared a balanced and wise report. In a short ten months, the members of the committee have been able to secure a grasp on the pulse of the people of Andhra Pradesh, but their soul remains elusive.

The academic basis of the report is of high quality. So is the range of consultations that have been made. Almost every prevailing viewpoint and fact has been taken in account. No one can say that their voice has not been heard. The research into the sociological and cultural basis of the split personality of the Telugus, the historical background to the controversy and the demand for a separate Telangana state, the economic basis, or lack of it, for the grievances pertaining to the region’s backwardness, political and administrative pre-history of the present crisis, have all been adequately examined and documented in this 505-page report.

What is the upshot of the effort? The heart of the Sri Krishna Committee is with the people of Telangana and empathises with their sense of alienation and neglect. The mind, however, comes down firmly on the side of a united Andhra Pradesh, with constitutional guarantees for Telangana’s personality and development. It remains to be seen if the soul of the Telugu people will be stirred by this mature and wise balancing act.

In addition to these six options, the committee has also recommended setting up of a Water Management Board and an Irrigation Project Development Corporation, thereby recognising how important the issue of river water sharing is to the entire problem of regional development within the state. Indeed, many analysts have long argued that the two developments that revived the dormant pro-separation feelings in the Telangana region were the late N T Rama Rao’s decision to build the Telugu Ganga project and allow Krishna waters to go to Chennai, and the late Rajashekhara Reddy’s projects that seek to take Godavari and Krishna waters away from the Telangana region to the Rayalaseema region.

Indeed, if the first separatist agitation of 1968-69 was triggered by a resentment in Telangana that coastal Andhra was gaining more from the state’s development, this time round there was as much resentment against the politicians of the Rayalaseema region (both Chandrababu Naidu and late Rajashekhara Reddy being from there).

Most observers have already discounted options (a), (b) and (c), and regard even (d) as impractical. The final solution will have to be either (e) or (f). Option (e) is what the separatists of the Telangana region seek and option (f) is what all those who seek status quo but recognise Telangana’s sense of alienation want.

The Sri Krishna Committee has cast its own vote in favour of the last option and has hastened to add that if, in fact, the bifurcation of the state is to be considered, this must be examined as part of a national review of statehood. A second States Re-organisation Commission (SRC) may have to be set up to undertake a more comprehensive review of all aspects of the problem.

The committee must also be commended for giving due weight to the importance of the future of Hyderabad. The report recognises the contribution made to the city’s development by the people of Coastal Andhra, and Hyderabad’s evolving national and global importance.

That the committee’s heart is with the people of Telangana is doubly established by the fact that the impressive statistical work done shows that, in fact, the state’s more backward region today is Rayalaseema and not Telangana. On most parameters of development, the Telangana region, even excluding Hyderabad, has done better than Rayalaseema despite the fact that for the past decade or so the state’s two powerful chief ministers, Mr Naidu and Dr Reddy, hailed from the Rayalaseema region!

The report, in fact, knocks the bottom out of the economic grievance of Telangana. Coastal Andhra economists like R Radhakrishna and Mahendra Dev had long punctured a hole in the views of Telangana’s economists like C H Hanumantha Rao. While rubbishing the backwardness argument, the committee empathises with Telangana’s sense of cultural alienation and political disempowerment. Nothing captures the former better than the way in which Telugu cinema, produced mostly by the Kammas of coastal Andhra, portrays Telangana Telugu and its people, and nothing captures the latter better than the fact that after Chenna Reddy, no Telangana leader has been made the state’s chief minister.

If the heart rules the politics of the state in the coming weeks, there may be no getting away from the state’s eventual bifurcation, whether now or after a second SRC submits its report. If the mind takes precedence, then the people of Telangana and the state as a whole would opt for the sixth option. The final outcome will depend on how the Sri Krishna report touches the soul of the Telugu-speaking people.